Welcome to the Fortnite News Page on TrackerFortnite.com Want to know more about the latest Fortnite changes, updates and improvements? Then make sure to keep checking this News section. Here we will also publish various Fortnite Articles on strategy tips, patch notes, interesting gameplay, Twitch streamers, YouTubers and more!

Fortnite Update v11.40 Leaked cosmetics and what to expect

The revamp which Chapter 2 has provided was very well received in the Fortnite community and servers are now down as Epic Games make way for the final patch. We've scoured the patch notes so you don't have to and instead of twiddling your thumbs take a look at what you can expect.

Bug fixes are reliably included in all updates but what are the issues players have experienced in previous patches which will be fixed:

One word for you. Sidegrading. That's right you can now use Upgrade Stations to convert your AR to Heavy AR. Rumours have been circulating in since November that the Heavy Assult Rifle was returning to Fortnite. This return may be met with a mixed reception as some players think the weapon is overpowered.

Last week there was a new batch of Overtime Challenges for the Remedy vs Toxin skin. It is no secret that data miner @Lucas7yoshi found the game files for the upcoming Overtime Chalenges but we are yet to find out the new skins will be. However news has leaked about all of the new cosmetics.

The drop is bursting with new cosmetics indicating Epic Games is willing to make up for a lack of updates of the winter holidays. This picture from @Lucas7yoshi gives you a quick rundown of all the leaked cosmetics. 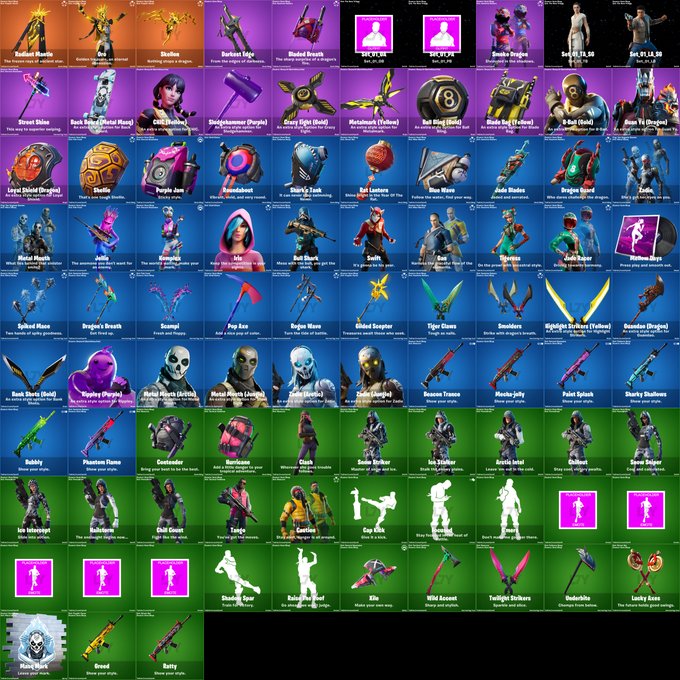 Now what can we see here. there are 23 new skins including six with presumably unlockable styles, nine new backblings have also been leaked which match with new skins. There two leaked gliders and 12 new pickaxes. Some have variants which are themed with the new skins such as the Spiked Mace which will fit nicely with Metal Mouth. The Street Shine also stands out as a quirky highlight. Last but most certainly not least you will spot seven new weapon wraps.
Top